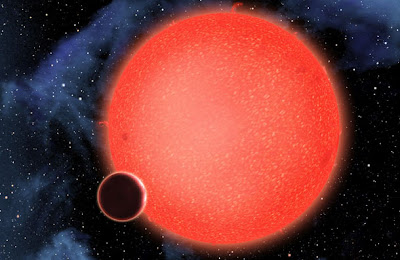 As planets go, GJ 1214b is right up there on the weird stakes. However, it's also wonderful! Representing a new category of exoplanet, GJ 1214b has been confirmed as a mysterious waterworld with a thick steamy atmosphere by astronomers working on the Hubble Space Telescope. Dubbed a "Super-Earth", the exoplanet is about 2.7 times the diameter of our home planet but weights nearly seven times as much. It orbits a cool, dim red-dwarf star (80% of all stars are red dwarves) at a distance of just two million KM (Earth is nearly 150 million KM from our Sun). Yet, because the red dwarf sun is much cooler than our own home planet, the temperatures on GJ 1214b probably don't exceed 230°C. Spectral analysis and estimations of its density suggest the planet consists mainly of water.

With the high temperatures and pressures on the surface of the mysterious waterworld things get a little freaky though. It is believed that the water might behave strangely in these conditions, creating exotic materials like 'hot ice' or 'superfluid water', substances not found on our world. The planet is like nothing astronomers have ever seen before and, being relatively close to Earth (around 40 light years), there will be opportunities for further analysis in the future - principally using the new James Webb Space Telescope which will be launched in around 5 years time.