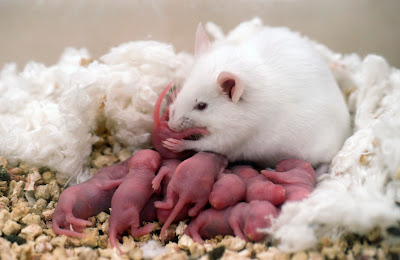 Scientists in Japan have successfully transformed mouse stem cells into viable eggs, which were later fertilised  in-vitro to create healthy baby mice. The research was led by Mitinori Saitou from Kyoto University and may provide hope for infertile human females in the future. The team of researchers harvested stem cells from adult mice and, with some genetic giggery-pokery, altered a number of genes to create cells very similar to the primordial germ cells that generate sperm in males and eggs in females. Last year, the researchers reported successful production of sperm cells using this method and now eggs too. The new eggs cells produced were mixed with other body cells and transplanted into living mice, where the cells matured into fully-grown eggs. The eggs were extracted, fertilised them in vitro and implanted them into surrogate mother mice. The fertilised eggs successfully formed baby mice, which themselves were able to reproduce.

While the work is a massive advancement, Saitou warns that much is still needed to be done before the technology can be used on humans. There was only a 4% success rate in the new eggs becoming baby mice so the technology is not perfect. However, it is likely that the research will help scientists understand the process of fertility in more detail and Saitou and his team will continue their work on monkey and human cells in the coming years to find out if the technology is transferable.

The research was published in the latest issue of the Journal Science. Click here for more information or here to learn more about stem cells from the Irish Stem Cell Foundation.
Labels: Biology Stuff Today's Science News