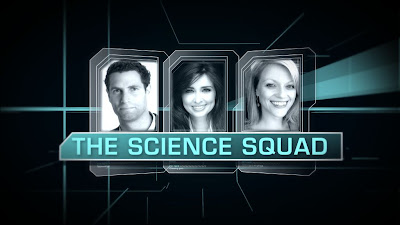 With Dublin proclaimed as European City of Science and next month set to take centre stage as the host of the European Science Open Forum (ESOF), "science" is the word on everyone's lips at the moment (well, as well as soccer). There seems to be a hunger for science at the moment amongst the Irish public so I am extremely delighted to see RTÉ's new dedicated science programme kicks off later this week.

'The Science Squad' is set to take an entertaining look at some of the exciting and important scientific research that is currently under-way in Ireland. The six part series will look at the latest developments in Irish scientific research, across a wide range of sectors, and crucially will aim to make the work being carried out relevant to our everyday lives.

Details of each episode have been released and I am genuinely excited! The first episode will focus on Ireland's advancing research in sensor technologies, focusing on how new technologies are being used in professional sport (the Irish rugby team), tuning in the newborn brains and meeting people with severe disabilities who are using sensors to create and play music with their eyes. The second episode will "think small", looking at current research in nanotechnology and genetics. Episode three will focus on "connections", taking a look at how research in maths, computing and biology are helping us overcome the challenges of our reliance on technology. Episode four sounds great - as well as focusing on ESOF, the team will speak to researchers who are using social networking techniques for novel global media applications, and meet the environmental scientists who are investigating how our current behaviour is detrimentally affecting our health. The final two episodes of the series will look at "the world before us" and "visions for the future", looking at how Irish researchers in environmental science, space exploration, agriculture and medicine are set to change the way we live our lives forever.

So who are "The Science Squad" anyway? The talented team of presenters include Irish science ambassador (and fellow Science 140 curator) Aoibhinn Ní Shuilleabháin, former Scope presenter Kathriona Devereux and Newstalk's Future Proof presenter Jonathan McCrea. It's a strong team - all three are at the heart of  Irish science communication - and I am confident the show will be extremely entertaining and informative. I think the show will need to be entertaining first and foremost if it is to grab the Irish public attention, with the science getting them to ask questions and keep coming back for more. It certainly couldn't have asked for a better time slot for the first episode - just before Ireland kick off against Spain in the European Championships - and hopefully the first episode will capture the public's imagination and make them come back the following week. I am personally delighted to see RTÉ embrace a science programme like this - not afraid to deal with "real science" as they have done so often in the past. I'm excited and can't wait for the show to kick off.

The first series of 'The Science Squad' kicks off this Thursday (June 14th) at 7:00pm on RTÉ One but will revert to it's normal time slot of 8:30 from June 21st onwards. You can also follow 'The Science Squad' on Twitter or Facebook.
Labels: Dublin 2012 What's on the Telly?