A Busy Day on Mars 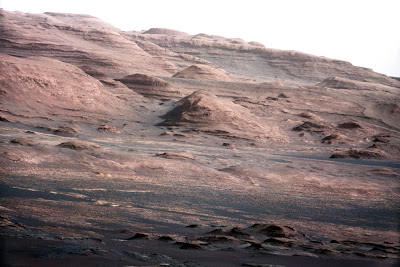 Yesterday was an extremely busy day on Mars for the Curiosity Rover. NASA's 'Mars Science Laboratory' or MSL sent back its first high definition photo from the Mars surface, revealing a geological "unconformity" on the slopes of Mount Sharp. The MSL's 100mm telephoto lens, one of 17 on board (including a 3D camera developed with Titanic & Avatar director James Cameron - can't wait to see the product of their collaboration), snapped the strata along the foothills of Mount Sharp with scientists deducing that one expected layer is missing. The NASA scientists hinted that is likely caused by volcanic or seismic activity but further tests will confirm or deny this. Curiosity will make its way further up the foothills of the mountain in an effort to discover if life ever existed on the red planet.

Yesterday, Curiosity also relayed the first human voice on the surface of Mars. NASA boss, Charles Bolden (who attended ESOF back in July), got the honour.

"Hello. This is Charlie Bolden, NASA Administrator, speaking to you via the broadcast capabilities of the Curiosity Rover, which is now on the surface of Mars."

"The knowledge we hope to gain from our observation and analysis of Gale Crater will tell us much about the possibility of life on Mars as well as the past and future possibilities for our own planet."

"Curiosity will bring benefits to Earth and inspire a new generation of scientists and explorers, as it prepares the way for a human mission in the not too distant future."

And if that wasn't enough, Mars got its first taste of Earth music when Will.i.am's 'Reach for the Stars', was played over the Martian airways. Below is a short video where the Black Eyed Peas front-man explaining how it all came together.

Curiosity now makes its way towards its landing site to analyse the scour marks left by the rocket-powered crane that lowered the rover onto the planet's surface. Curiosity will zap Martian rock, using its ChemCam, to analyse the vapour. Its DAN instrument will look for hints of past life on Mars while its Sam instrument will sniff and analyse the Martian air. Keep up to date with Curiosity - visit the official website here.
Labels: Space Exploration Today's Science News Videos