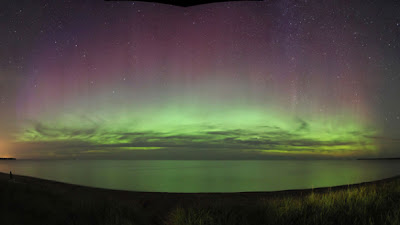 Last Sunday, the side of the Sun facing Earth erupted in a blaze of activity known as a "coronal mass ejection". These solar storms throw up to approximately 10 billion tons of superheated gas off the surface of the star and hurtling into space at around a million miles an hour on a path towards Earth. It covered the 93 million mile journey from the Sun to the Earth in just three and a half days. On entering the Earth's atmosphere, these particles of gas (collectively called a plasma) interacted with the planet's magnetic field, producing some spectacular displays of aurora - the northern and southern lights. The northern lights were visible last night in northern Europe, North America and Russia. The above picture was taken over Lake Superior in the US.
This increase in solar activity has been expected, with our nearest star moving into a new cycle of maximum activity, some say waking up after a period of "solar sleep". This increase in solar activity is said peak in 2013. Our favourite astronomy blog, The Orbiting Frog, has more on this story. (It's not our favourite because it has a frog in its name, but it helps)
Labels: Astronomy Today's Science News Todays Science News