Today marks the 205th year since the birth of William Rowan Hamilton, one of Ireland's greatest scientists. We featured a biography of Hamilton in March of last year which is featured below. This biography is from our series of posts entitled Famous Irish Scientists. 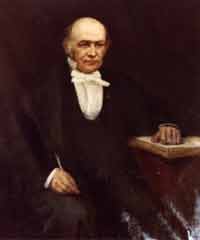 Born in Dublin in 1805, William Rowan Hamilton grew up to become one of the greatest mathematicians of all time. Even at the beginning of his career, he was regarded by many as a second Newton. By the age of thirty, he was knighted for his scientific achievements.
His family, conscious of their son's early promise, sent him to live in Trim with his uncle when he was three years old. His uncle the Rev. James Hamilton, was an honours graduate in Classics of Trinity College, and a bit of an eccentric. Hamilton is said to have displayed his genius at a very early age. By the age of five, William Hamilton started learning Latin and Greek, and by the age of seven he was already speaking Hebrew. His uncle, being a linguist, taught him, and by the time Hamilton turned 13 he had already learned 15 languages including Sanskrit, Malay, Persian, Arabic and Hindustani as well as many modern languages.
His talents in natural sciences emerged at a very early age too. At the age of ten he read a Latin copy of Euclid, his introduction to Geometry. Hamilton started studying Mathematics at 13 when he studied Clairaut's Algebra, through French. In 1822 at the age of 17, he found a mistake in Laplace's Mechanique C'eleste, a five volume work of mathematical astronomy. This brought him to the attention of Dr. John Brinkley, Astronomer Royal of Ireland. Hamilton entered Trinity College at the age of 18, studying classics and science. While a student in Trinity he received an "optime" (a distinction that was very rarely awarded) in Greek in his first year. Two years later, he received another optime, this time in mathematical physics. In 1827, at the age of only 22, he was nominated as Professor of Astronomy at Trinity College. Hamilton's home thereafter was at the observatory at Dunsink, which lies about five miles from the centre of Dublin.

His most famous discovery is of Quaternions (a non-commutative extension of complex numbers) was made. On Monday Oct 16th, 1943, when he was walking along the Royal Canal with his wife, the idea of Quaternions came to him, in a dramatic flash of inspiration. In his excitement he carved the formula in the stone of Brougham Bridge. This can still be seen today.
Quaternions opened up a vast new field of mathematics. However many mathematicians at the time found them too difficult to use. Today they are the basis of computer graphics. In 1834, he published "General Methods in Dynamics " which was to be the most important of all his mathematical discoveries. This mathematical method, which allows light to be treated as waves or particles equally, virtually predicted modern wave mechanics. Atomic fission and laser beams are just some of the modern developments that are grounded in this same maths. Hamilton also predicted the unexpected phenomenon of Conical Refraction in bi-axial crystals, which served to immediately highlight his name, and won him the Royal Medal of the Royal Society, in 1835.
Hamilton's later life was unhappy. The death of his sister and friend William Wordsworth (the acclaimed English romantic poet) and an unhappy marriage resulted in troubled times for Hamilton. After two years of abstaining, he became addicted to alcohol. In 1865, he died from a severe attack of gout.
Hamilton is still regarded as Ireland's finest mathematician and one of our great scientists. Today there is a Crater named after William Hamilton on the moon, in memory of this great mathematician. In addition, the Hamilton Mathematics Institute in Trinity College Dublin is an institute dedicated to fostering mathematics and related disciplines. The Institute also aims to improve the public understanding of mathematics.
Labels: On This Day People in Science