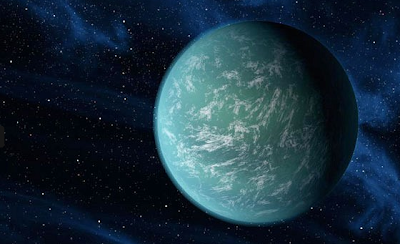 Earlier today NASA reported that, since it's launch in 2009, the Kepler spacecraft has discovered over two thousand planetary objects outside our own solar system. Just over two hundred of these are thought to be similar in size to Earth, nearly seven hundred were super-Earth-size, over a thousand are Neptune-size, two hundred are Jupiter-size and fifty five are larger than Jupiter. Forty eight of the planets discovered were in the "habitable zone" - a distance from their orbiting star which would allow liquid water to exist and, therefore, could potential harbour life.

The smallest planet found in the habitable zone to date was also announced earlier today - Kepler 22b. This "Goldilocks" planet (not too hot, hot too cold but just right) is 2.4 times the size of Earth and orbits a star similar to the Earth's sun. Kepler 22b is believed to have a surface temperature of around 22 degrees Celsius, which would allow liquid water exist on its surface. NASA do not know what the planet is made of - it could well be a ball of gas like Jupiter - but the find is very significant indeed. Kepler 22b is over 600 light years away - or 3,600 trillion miles - and travelling there would be impossible (with our current understanding of the laws of physics anyway).

Kepler finds planets by observing the light from stars and looking for small changes or fluctuations. The changes are caused by planets passing in front of the star they are orbiting. The Kepler scientists can then ascertain the speed of the orbit and the distance from its sun from data collected by the spacecraft. Kepler 22b is so called because it was discovered from the 22nd star observed by Kepler with the "b" indicating it was the first planet found orbiting that star (they don't ever use "a" for some reason). Some news reports are calling Kepler 22b "Earth's twin", which is complete nonsense - we have no idea what the planet is made of or if water even exists there.

Suggest Pupil Activity: Find out more about Johannes Kepler - the scientist who lends his name to the Kepler spacecraft.