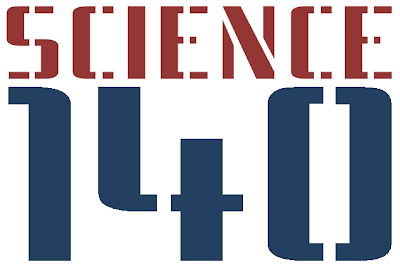 I am delighted to launch a new science themed crowd-sourcing social media project - Science 140. The idea is simple. Using twitter (and the hashtag #science140) or the Science 140 website we want to collate short science definitions and explanations (all less than twitter's 140 character limit) from across the various branches of science. The project aims to bring together the best of these explanations and publish them in book - the proceeds of which will go to charity. All tweeters will be credited in the final product. As one might expect, the idea had its origins on twitter during a conversation between Paul O'Dwyer (@ShirtnTie), Aoibhinn Ní Shúilleabháin (@Aoibhinn_ni_s) & me (@TheFrogBlog)

As well as definitions we also want people to explain how something works, why things are the way they are or what happens if etc. As mentioned before, these can be from across the sciences and could include the human body, the universe, space, astronomy, microbiology, physics, chemistry, food science, zoology, plant life, cells, history of science, famous scientists, medicine, engineering, maths or even social science. The Science 140 website contains some examples of what we are looking for as well as more information on what we want to achieve. There is also an associated twitter account (@Science140) which will retweet submissions daily and call for ideas based on daily themes!