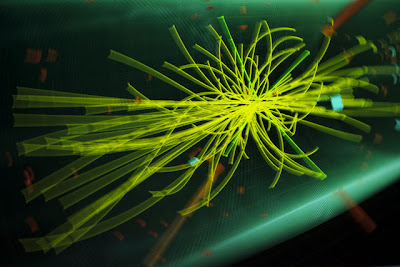 Early this morning, the physicists working at CERN's Compact Muon Solenoid (CMS) experiment in the Large Hadron Collider (LHC) confirmed that a new particle has been found during their recent experiments.  The CMS team recorded a "bump" in their data which points to a new particle with a mass of 125.3 gigaelectronvolts (GeV) - about 133 times heavier than a protons. However, further tests are needed before it can be confirmed as the elusive Higgs Boson or 'God Particle' as it has been nicknamed but the way the particle decays suggests it is definitely a boson. The CMS scientists revealed that their results are so accurate that there is only a one-in-two million chance that the "bump" was not created by the Higgs Boson yet, unbelievably, that is actually below CERN's normal standard for confirmation of new particles.


The discovery of the Higgs Boson won't affect our everyday lives, but it does fill an important gap in the Standard Model, the theory that describes the twelve building blocks of our universe and the four forces that govern them. The Higgs Boson was an important feature of the theory and the missing piece that allows  particles have mass. It's existence was first theorised by Dr. Peter Higgs nearly 50 years ago but it has eluded scientists since then. It's discovery would confirm the validity of the Standard Model, but still does little to explain how dark matter comprises over 96% of our universe or how gravity works. Further tests are planned to see how this new particle behaves. According to CERN director general Rolf Heuer, who visits Dublin in a couple of weeks,


"The discovery of a particle consistent with the Higgs boson opens the way to more detailed studies, requiring larger statistics, which will pin down the new particle's properties, and is likely to shed light on other mysteries of our universe."

It's an exciting time for physicists and one of the most important achievements since Apollo 11 landed on the moon. Below is how the discovery was announced at CERN this morning. To find out more about the Higgs Boson and how it works, visit the BBC Science website Higgs Q & A page.


On a side note, I tweeted this morning that the Higgs discovery won't cause any of the Leaving Certificate Physics textbooks to be rewritten as, sadly, there is no mention of particle physics on the proposed new syllabus. Ah well!