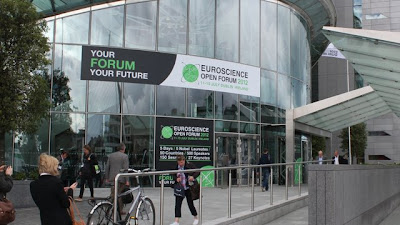 The Euroscience Open Forum (ESOF), Europe's largest general science meeting, blasted off in style this evening at Dublin's Convention Centre. Delegates were treated to an entertaining and uplifting opening ceremony which was officially opened by our wonderful President Michael D Higgins.

Michael D spoke passionately, gracefully and with a splash of poetry to lift the spirits of the thousands of people in attendance. Our President spoke of Ireland's "reputation for creativity, for originality and for our unique and imaginative view of the world", yet noted that when one thinks of this reputation the figures of Joyce, Heaney or Friel are often held high as prime examples. Yet Michael D cited the need to link this reputation for creativity, originality and imaginative thinking with our citizen's numerous scientific achievements such as Bell’s Theorem, the development of fibre optics, the splitting of the atom or the Beaufort Scale to name but a few. President Higgins spoke also of the need to create further links between the arts and science, noting that the "connecting discourse for science, technology, society and culture is indeed a pervading theme throughout this conference". He concluded by reminding everyone of the ethical responsibility that comes with scientific and technological advances, calling for a "globalisation of ethics". He highlighted the future challenge to provide food for the growing world population, while maintaining biodiversity and protecting our environment.

"In this way we can build a promising future underpinned by a solid foundation of excellent science and technological innovation informed by a contemporary ethic founded on a justice drawing on the need of the many rather than the speculative adventures of the few."

President Higgins' rousing speech was followed by contributions from Professor Patrick Cunningham - Chief Scientific Advisor to the Government, Máire Geoghegan-Quinn - European Commissioner for Research, Innovation and Science, Richard Bruton - Minister for Jobs, Enterprise and Innovation and Enric Banda, - President of Euroscience. These four speakers seemed to speak from the same hymn sheet, quoting a need for investment in scientific research and its role in European economic recovery and growth. Science communicator and comedian Dara O'Briain pulled all the strings in a smooth organised event yet he couldn't avoid mentioning the Irish fondness for the pub!

Thus followed an entertaining interlude of music, dance and bodhrán inspired audience participation from the Rhythm Corporation. The twitter machine lit up, with the uilleann pipe and bodhrán players receiving numerous compliments on the active social networking site. The Science Gallery's Shaun O'Boyle masterfully punned the performance the "Jiggs Boson" at the "Large Bodhrán Collider".

It was a tough act to follow but the first keynote speaker of the conference, Nobel Laureate Jules Hoffmann, was well up to the task. Hoffmann spoke of his award winning research on the function of the "Toll" gene in fruit fly innate immunity and how these genes act in humans and other mammals too. It was incredibly interesting and engaging, although I should have brushed up on my immunology notes from college this morning to fully appreciate the man's genius. He concluded on a personal note, one shared by TCD Professor of Immunology Luke O'Neill (who introduced Hoffmann) at the recent Irish Science Teachers' Association Conference back in April. Hoffman, and O'Neill, spoke of the a blissful time in science when research was "driven by curiosity" not by the need to find applications in industry or medicine. He urged policy makers and funding bodies to treat basic research and applied research with the same principles. Just because the research doesn't have any immediate applications, doesn't mean it will not in the future. This was particularly interesting as it would appear that Science Foundation Ireland, Ireland's leading academic funding body, has been told my government to focus on applied research in their recent allocation of funding. I hope the politicians present took heed of Hoffmann's views.

Finally, you are probably wondering about the mini-burgers! Well, all I will say is YUM and that they cost me a good seat in the auditorium!

ESOF continues tomorrow and I'm looking forward to a busy day of workshops, lectures and panel discussions (particularly an interview with James Watson). Check out the ESOF website to catch a video of tonight's opening ceremony and for live feeds of selected keynote addresses. Bye for now!