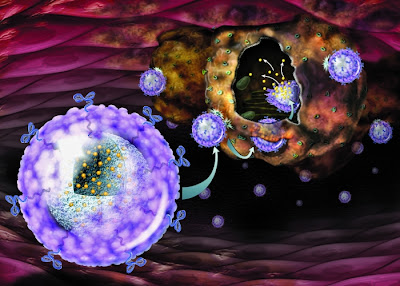 Researchers in Chicago have revealed how a new nano-particle drug delivery system can halt the effects of Multiple Sclerosis (MS) in mice and may offer hope to people with other autoimmune disorders like Type 1 diabetes, asthma or food allergies.

This new breakthrough, which highlights the potential benefits of nanoscience to medicine, reveals how  biodegradable nanoparticles were used to create a new "stealthier" delivery system for treating MS. The nanoparticles allowed the active antigens to trick the immune system into stopping its attack on myelin (the protective insulating coat on nerve cells - it literally gets on your nerves!) and halt the effects of MS in test mice.

In MS, the immune system attacks the myelin membrane that insulates nerves cells in the brain, spinal cord and optic nerve. When the insulation is destroyed, electrical signals can't be effectively conducted, resulting in symptoms that range from mild limb numbness to paralysis or blindness.

Importantly, the new nanoscience influenced treatment does not suppress the entire immune system as do current therapies for MS, which make patients more susceptible to everyday infections. Rather, when the nanoparticles are attached to myelin antigens and injected into the mice, the immune system is reset to normal. The immune system stops recognizing myelin as an alien invader and halts its attack on it.

What's very exciting is that the technology could be applied to a variety of immune-mediated diseases including Type 1 diabetes, food allergies and airway allergies such as asthma. Stephen Miller from Northwestern University Feinberg School of Medicine, outlines the ijmportance of the development.

"This is a highly significant breakthrough in translational immunotherapy. The beauty of this new technology is it can be used in many immune-related diseases. We simply change the antigen that's delivered."

In the study, the researchers attached myelin antigens to the nanoparticles, which are easily produced and made from a substance already approved by the Federal Drug Administration, and injected them intravenously into the mice. The particles entered the spleen, which filters the blood and helps the body dispose of ageing and dying blood cells. There, the particles were engulfed by macrophages, a type of immune cell, which then displayed the antigens on their cell surface. The immune system viewed the nanoparticles as ordinary dying blood cells and nothing to be concerned about. This created immune tolerance to the antigen by directly inhibiting the activity of myelin responsive T cells and by increasing the numbers of regulatory T cells which further calmed the autoimmune response.