NASA Discover Most Distant Galaxy Ever 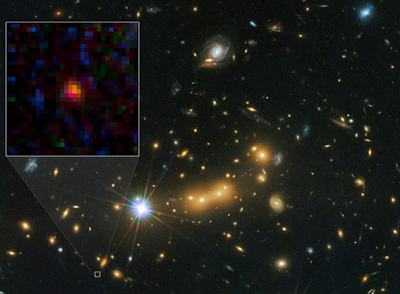 NASA astronomers claim to have found the most distant galaxy ever seen. Using the soon to be retired  Hubble Space Telescope and the Spitzer Space Telescope. Given the catchy title, MACS0647-JD, the galaxy is very small compared to our Milky Way and is approximately 13.3 billion years old. What we are really seeing is what MACS0647-JD looked like just 420 million years after the Big Bang - just 3% of the age of the universe.

The galaxy was detected using an effect known as gravitational lensing, where large clusters of galaxies are used as "natural zoom lenses" to enlarge the appearance of galaxies behind them. Astronomers were able to detect a hint of light from MACS0647-JD because light from the galaxy took a detour, around 8 billion years into its journey, along multiple paths around the massive galaxy cluster MACS J0647+7015. The cluster's gravity boosted the light from the faraway galaxy, making the images appear several times brighter than they otherwise would have, enabling the astronomers to detect the galaxy more efficiently and with greater confidence.

The galaxy appeared as a small blob much smaller than our Milky Way, suggesting it may have been glimpsed as it was in the early stages of the formation of a larger galaxy. Of course, the newly discovered galaxy may not actually exist now or may have merged with other galaxies.

The new images suggest that MACS0647-JD was only 600 light-years wide, but a typical galaxy of a similar age ought to be more than three times this width. Our Milky Way measures 150,000 light-years across.
Labels: Astronomy Space Exploration Today's Science News