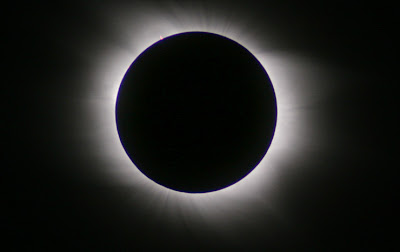 Tonight the Moon passed in front of the Sun, casting a 150km wide shadow across the planet, starting in Australia's Northern Territory, then crossing the north eastern tip of the southern continent before swooping east across the South Pacific. No Pacific islands were in its direct path. Only certain areas of the eastern Australia coast witnessed the total eclipse, plunging the region into total darkness for a few fleeting minutes. A partial eclipse will be visible from east Indonesia, the eastern half of Australia, New Zealand, Papua New Guinea and southern parts of Chile and Argentina.

Thousands of science enthusiasts, amateur astronomers and scientists have flocked to the eclipse zone in the hope of catching this rare occurrence - the next total eclipse won't occur until March 2015.  Although weather forecasters predicted cloudy skies, making the likelihood of catching photos like the one above slim, there were some gaps allowing onlookers witness the amazing feat first hand. The best places on land to see totality was along a 100 kilometre stretch of coastline on north-east Australia, overlooking the Great Barrier Reef and the Coral Sea. Cairns is the only city on the eclipse trail. The video has just been recorded from the beach at Cairns!


A total eclipse is possible because, by coincidence, the Sun's distance from Earth is about 400 times the Moon's distance, and the Sun's diameter is about 400 times the Moon's diameter. Because these ratios are approximately the same, the Sun and the Moon as seen from Earth appear to be approximately the same size. The next total solar eclipse likely to be visible from Ireland won't occur until January 2090, although we should see a partial eclipse, around 80%, in March 2015.
Labels: Astronomy Today's Science News