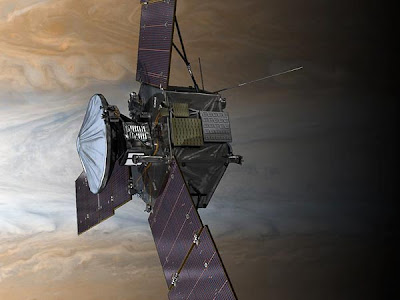 Later this afternoon, NASA will launch the Juno Space Probe on a mission to explore the largest planet in the solar system - Jupiter. Juno will be launched from Florida aboard an Atlas V rocket. The journey will take 5 years as the probe must travel over 2800 million kilometres to reach its target. When it arrives it will orbit the gas giant thirty three times, as speeds of over 160,000kph (making it the fastest man-made object ever) before hurtling itself into the enormous planet. On board are eight instruments designed to study various aspects of the planet - including its phenomenal magnetic field - and try to figure out how the planet formed over 4.5 billion years ago.  NASA also hope to find out more about the composition of Jupiter's core and about the violent weather patterns on its surface. When the mission is complete, Juno will be directed to crash into the planet - avoiding the possibility of it crashing into one of its many moons - including Europa which could potentially sustain life. The video describes what Juno will do and meets some of the scientists behind the mission. Ian Sample has a great piece in the Guardian Newspaper about Juno's mission too