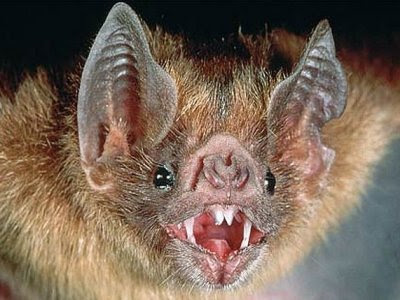 New research, published recently in Nature, has revealed the secrets of how vampire bats detect the heat signature of their prey. The Common Vampire Bat, Desmodus rotundus, need to feed on the blood every night in order to survive. The bats feed only in complete darkness, usually preferring to feed on sleeping mammals. Once detected, they climb atop their unsuspecting victim and look for the sweet spot - the area where blood is closest to the skin and easily accessed. To to this they use their heat-adapted nerves in their upper lip and nose to detect blood up to 20cm under their prey's flesh. Vampire bats are one of only a number of animals that can detect heat (infra-red) and are the only mammals (all the other are snakes). The new study reveals the gene responsible for the vampire bats ability to detect the blood - a modified version of a gene called TRPV1. In humans TRPV1 causes a burning sensation when exposed to temperatures over 43 degrees C and when we eat foods like chillies or mustard. But in vampire bats, the gene has been altered slightly allowing the bat detect temperatures closer to 30 degrees C - hence allowing the bat detect the temperature of blood within a 20cm range. When feeding, the bats saliva has an anticoagulant which prevents the blood from clotting (incidentally scientists have developed anti-clotting drugs from the vampire bats saliva). Ed Yong has more detail on this extremely interesting finding in his wonderful blog 'Not Exactly Rocket Science'. The short video below, from National Geographic, shows vampire bats feeding on a sleeping pigs.