By now you should all be familiar with Science Calling, Maria Daly's brilliant weekly science blog. Each Friday, Maria provides another nugget of science wonder with her posts crafted expertly on a wide range of science topics. Maria's enthusiasm for science communication is evident in each of her posts and I look forward eagerly to seeing what she will come up with next! To date, Maria has provided some extremely enjoyable, easy to read and informative pieces - often taking a simple topic unrelated to science and revealing the wonder within. Some of my favourite posts to date include 'Nature's Hybrids', 'The Science of Irish Proverbs', 'Irish Americans: Invasive Wildlife Abroad' and 'My Favourite Virus'. Her latest post, 'Light Science: Optogenetics' is another brilliantly constructed piece of science writing - describing the breakthroughs emerging from a new technique of neuroscience. The new post is reproduced below, with Maria's permission of course.

Almost every lecturer in college talked about new discoveries in science and the importance it is to keep up to date. In the past few weeks the rapid advancement of science has become very apparent to me as I attempted to catch up with what I have missed since graduating. Optogenetics has recently emerged in neuroscience and was named Method of the Year by Nature in 2010. The more I read about this technique, the more exciting it becomes. Time to delve into the world of scientific methods! The story begins in 1971 when a light activated protein called bacteriorhodopsin was discovered. Other microbial opsins were subsequently found and studied. Research in a lab in Stanford published in 2005 showed that opsins enabled cells to be controlled by beams of light. Importantly, they did not need to add any other components or chemicals to the cells to enable this. The term “optogenetics” was coined and this method is now being used by over 800 labs around the world. The study of the brain and psychological diseases has mainly been completed by using electrodes or drugs to stimulate specific areas. These are not very accurate as electrodes stimulate other brain areas and drugs are very slow acting. Optogenetics works in a new more specific way. Opsin genes are inserted into the desired cells using molecular engineering. Opsin containing cells can be controlled by scientists at the same speed and precision as occurs naturally in the body. This is important when conducting experiments as they are more true to life. This video from MIT gives a good overview of how optogenetics works.

Last month, the increased specificity of optogenetics was shown in an experiment on sleep patterns in mice. A team at Stanford University inserted an opsin gene into a group of neurons (brain cells) known to help rouse sleeping animals. Optogenetics allowed the mice to be woken for less than two seconds. This allowed the scientists to study interrupted sleep in animals for the first time without stressing or waking the animals fully. While the mice showed all the physical signs of having slept well, the experiment showed interrupted sleep affected memory formation. Optogenetics also has applications beyond neuroscience and many researchers are using it in a variety of organs and cell types. In June, scientists from ETH Zurich described their use of optogenetics to regulate blood sugar in mice. They inserted a light activated protein into human kidney cells. These cells were placed under the skin of diabetic mice. When the mice were exposed to blue light, a reaction was started in their body leading to the production of insulin. Science journalist Ed Yong has written interesting posts about these optogenetics experiments. 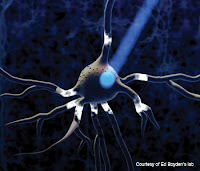 To conduct experiments such as these, new technologies are being developed. In many neuroscience experiments, devices that transmit light to specific areas of the brain are needed. In order to study animal behaviour, these devices must be mobile and light so they do not affect movement. Optogenetics will continue to advance at a rapid pace as more customized tools come on stream. Optogenetics is a great example of how a new scientific method can rapidly change an area of science. Its invention was made possible by the combination of different fields of science and technology: microbiology, genetics, neuroscience and engineering. It also shows how basic science is vital and can yield unexpected uses down the line. Microbial opsins were studied for over 30 years without any projected application to human health or disease. Watch out for new research in this area as it is definitely going to produce lots of interesting results. Science is certainly ever changing!