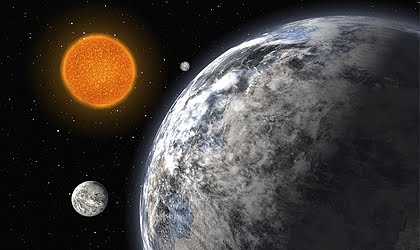 The European South Observatory (ESO)'s HARPS Telescope in Chile has discovered a whopping fifty new exoplanets, confirming its place as the the world's most successful planet finder. An exoplanet is a planet found outside of our solar system and scientists have discovered close to 500 so far. Most exoplanets discovered are "gas giants" - similar in structure to Jupiter but much much larger. However, sixteen of the fifty announced today are classified as "Super Earths" - a planet with a mass higher than Earth's, but substantially below the mass of the Solar System's gas giants.

HARPS stands for High Accuracy Radial Velocity Planet Searcher and is responsible for finding over 150 exoplanets including HD 85512 b, a newly discovered planet estimated to be only 3.6 times the mass of the Earth. HD 85512 b is located at the edge of the habitable zone — a narrow zone around a star in which water may be present in liquid form if conditions are right. Such planets are often called "goldilocks planets" - not too hot, not too cold but just right!

This is the largest number of such planets ever announced at one time. The new findings are being presented at a US conference on Extreme Solar Systems where 350 exoplanet experts have congregated.
Labels: Astronomy Space Exploration Todays Science News