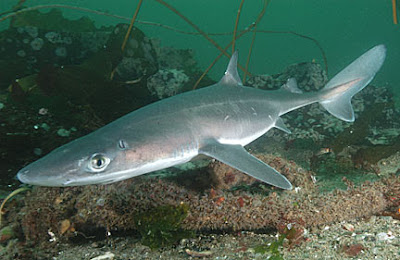 A new breed of anti-viral drugs may be on the way - using a substance found in sharks! The compound, called squalamine, is found in liver tissue of dogfish - small sharks found in the Atlantic, Pacific and Indian Oceans (including off the Irish coast) - has been shown to fight several viruses that cause disease in humans including hepatitis and other nasty viruses. The chemical is thought to be one of the main reasons why sharks have a natural ability to resist viral infections.

The new study from Michael Zasloff - the man who discovered squalamine back in 1993 - reveals that the wonder compound can also disrupt a virus's life cycle and prevent it from replicating in both lab tissue cultures and in live animals. And it doesn't end there. Squalamine is currently being used in human clinical trials for the treatment of cancer and some eye disorders, and no significant side effects have been observed as yet.

Current antiviral drugs are highly specific - each targeting just one strain of a virus - but strains can easily mutate and become resistant to the medication. Drugs produced from squalamine could provide resistance  against several different viral diseases.

The research appears in the journal Proceedings of the National Academy of Sciences. For more information on this story visit the National Geographic News website.
Labels: Todays Science News