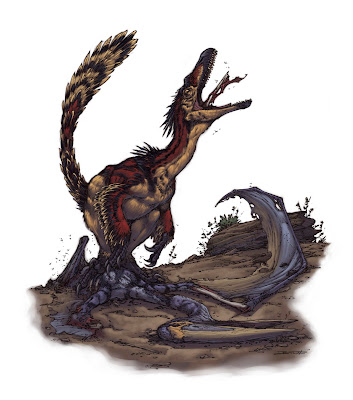 A detailed analysis of a 75 million year old fossil in the Gobi Desert has sparked debate amongst palaeontologists. The fossil is that of the voracious predator Velociraptor - the dinosaur made famous by Jurassic Park - with the remains of a Ptersoaur (flying dinosaur) bone in it's gut. Although represented in Jurassic Park as a seven foot tall monster, Velociraptor was actually no bigger than a domestic turkey and probably had a light dusting of feathers.

The pterosaur bone was 75mm long bone was found in the rib cage of the Velociraptor, where its gut would have been. There is little fossil evidence of theropod feeding so the result if significant. One of the co-authors of the report, published in the journal Palaeogeography, Palaeoclimatology, and Palaeoecology, is David Hone - a palaeontologist and friend of the Frog Blog who was working in UCD at the time of the study. He describes how rare the find is:

"Gut contents are pretty rare and pterosaur bones are rather fragile and don't preserve well, so it is an unusual find."

"It would be difficult and probably even dangerous for the small theropod dinosaur to target a pterosaur with a wingspan of 2 metres or more, unless the pterosaur was already ill or injured,"

This would therefore suggest that the Velociraptor was likely scavaging from the carcass of the fallen pterosaur. In addition to proving that Velociraptors took advantage of ailing animals, Dr Hone suggests that the evidence also suggests small dinosaurs were well able to eat relatively large bones - something shared by modern crocodiles.

To find out more about this story visit David's excellent blog Archosaur Musings or read a report from the BBC Nature website on this significant find.