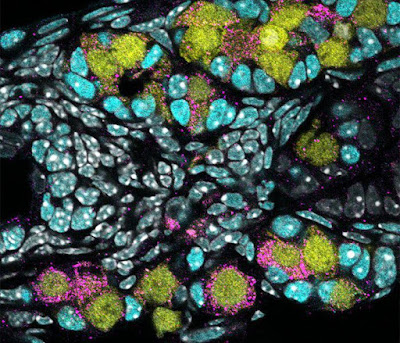 A team of scientists in Japan have successfully produced early stage egg cells (called oogonia or egg mother cells) from human adult stem cells. Stem cells are cells in the human body that haven't been assigned a role yet - in theory they can be turned into any kind of cell - and are therefore said to be undifferentiated. Their potential in the treatment of multiple human diseases excites scientists across the world. In this experiment the scientists used blood cells to first create the stem cells - referred to as induced pluripotent stem cells - which were later turned into the immature egg cells - oogonia.

The challenge for scientists working in this field is to get the stem cells to differentiate or change into the cells they need - eggs, liver, nerve, blood, sperm, muscle cells etc. In this investigation the researchers incubated the cells in artificial ovaries, created using embryonic mouse cells. After four months the cells had developed into oogonia - the immature egg cells. These cells are not advanced enough to be fertilised by a sperm cell (see below to see how oogonia form into mature eggs) but the hope is that further investigations can allow scientists create mature egg cells which can be fertilised. The Japanese scientists believe its only a matter of time before a fully mature egg cell can be produced using their technology, potentially allowing for those with fertility problems, same sex couples or others unable to conceive to create eggs from their own cells. These cells could then be fertilised by sperm cells in-vitro, forming an embryo. The scientists published their results in the journal Science.

The same group of scientists actually produced both mice sperm and egg cells back in 2012, using the same technology, and successfully fused them together. The embryos were later implanted into adult mice and developed into baby mice, who themselves were able to reproduce. (Funnily enough this was one of the last stories we covered in the Frog Blog before it closed in 2013).

Extend Your Knowledge - Oogenesis
Oogenesis is the process by which an egg mother cell or oogonium matures into a female ovum or egg. Oogonia are diploid cells, meaning they have two sets of chromosomes in their nucleus, whereas mature eggs cells only contain one set of chromosomes and are called haploid.

The process actually begins in girls before they are even born. Stem cells form into oogonia early in the development of the baby. These cells increase in size and form what are known as primary oocytes. (Girls are born with all the primary oocytes they will have). The primary oocytes begin a special type of cell division called meiosis, while still in the womb, which will ultimately forms four haploid cells. One of these cells becomes an egg or ovum, while the others are known as polar cells. The first stage of this division occurs before the girl is born and the process is completed at the onset of puberty and then roughly every month after that. The eggs matures within a Graafian follicle in the ovary and are released during ovulation.