Honda FCX Clarity - The Car of the Future 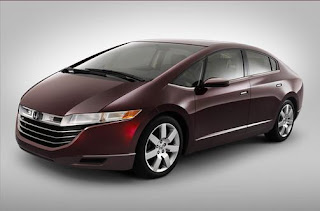 Why am I talking about cars in the science blog? Well I love cars! But also because the Honda Clarity is the car of the future. Why? Well because it looks like a regular four door saloon and acts like a regular four door saloon,but it is not a regular four door saloon car. It is an electric car but with no battery. Instead of a battery it has a Hydrogen Fuel Cell. Instead of putting petrol or diesel into this car, the car is filled with Hydrogen. The Hydrogen is burned and the energy converted into electricity, which makes the car go! This car can produce around 130 bhp, which makes is comparable to most family cars. But why is Hydrogen power so useful. Well first, unlike oil, Hydrogen will never run out as it is the most abundant element in the universe. It also produces no emissions. All that comes out of the exhaust is Water, H2O! But this is no car of the future, it is available for sale now, but unfortunately not in Ireland. The Clarity is available in Japan and also in California, where a thorough study is being carried out. Hydrogen is available in "Gas Stations" at the same price as petrol, but it will probably come down in price when more cars are produced in the future. I am sure many of the pupils in this school will be driving Hydrogen powered cars in the future! To find out more about how this amazing feat of engineering works click here.
Labels: Feats of Engineering Technology