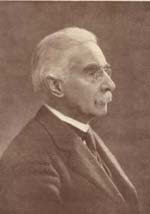 Today marks the 75th anniversary of the death of John Joly.
John Joly was an Irish geologist, botanist, physicist and inventor whose interests spanned several fields. Using Edmond Halley's method of measuring the degree of salinity of the oceans, and then by examining radioactive decay in rocks, he estimated Earth's age at 80-90 million years (1898). Later, he revised this figure to 100 million years. He published Radioactivity and Geology in 1909, in which he demonstrated that the rate of radioactive decay has been more or less constant through time. He also developed a method for extracting radium (1914) and invented a constant-volume gas thermometer, a photometer, and a differential steam calorimeter for measuring the specific heat capacity of gases at constant volume. He was also involved in pioneering radiation therapy for use in cancer treatment and patented the first method of using colour photography. As for those who study Biology, his name is synonymous with explaining how xylem transports water from root to leaves, as he developed the 'cohesion - tension model' of water transport with his colleague Horatio Dixon. He died on this day, December 8th, in 1933.
Labels: On This Day People in Science