Science Fact of the Week 3 - The Sun 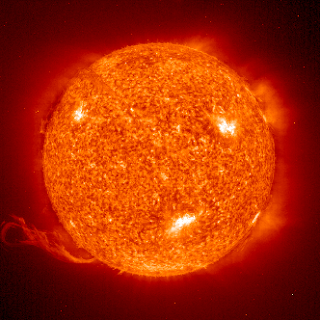 Believe it or not, the Sun is just a star, exactly like those we see twinkling at night. The Sun, however, is so much closer to us on Earth that it looks much bigger and much brighter, and we can even feel heat coming from it. Scientists know a great deal about the stars that shine at night. Compared to these other stars, the Sun is actually quite average. Many of the stars that appear so small in the night sky are actually much bigger than our Sun, although others may be quite tiny in comparison. Some are much hotter, and some are so cool and dim we can barely see them. But for us on Earth, the Sun is just right! The Sun is made of hot gases and contains many of the same materials we find here on Earth. These materials include hydrogen, helium, calcium, sodium, magnesium, and iron. In fact, most of the atoms in our bodies were made inside stars! As the famous scientist and educator Carl Sagan says, we are "star stuff." The Sun is HUGE. It looks small because it is 93 million miles away. (That's about 150 million km.) The Earth is very tiny in comparison to the Sun. In fact, if you think of the Sun as a basketball, the Earth would only be the size of the head of a pin -- a mere speck. The Earth is about 13 thousand kilometers (8,000 miles) wide, whereas the Sun is roughly 1.4 million kilometers (900,000 miles) across. This means it would take more than 100 Earths to span the width of the Sun. If the Sun were a hollow ball, you could fit about one million Earths inside it. We will publish some more star facts in a few weeks time!
Labels: Astronomy Physics Stuff Science Fact of the Week