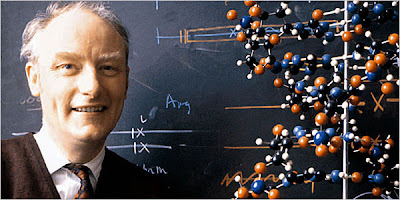 Francis Harry Compton Crick was a British biophysicist, who, with James Watson and Maurice Wilkins, received the 1962 Nobel Prize for Physiology or Medicine for their determination of the molecular structure of deoxyribonucleic acid (DNA), the chemical substance ultimately responsible for hereditary control of life functions. Crick and Watson began their collaboration in 1951, and published their paper on the double helix structure on 2 Apr 1953 in Nature. This accomplishment became a cornerstone of genetics and was widely regarded as one of the most important discoveries of 20th-century biology. He died on this day, July 28th, in 2004. To find out a little more about Francis Crick, click here.
Labels: On This Day People in Science