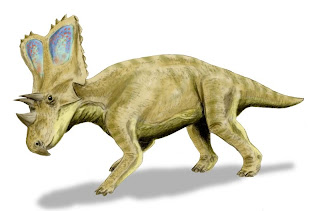 A researcher at Yale University has discovered a horned dinosaur about the size of a small rhinoceros with an ostentatious heart-shaped frill that even Lady Gaga might envy. He dubbed it Mojoceratops. According to one of the research team “a funky dinosaur needs a funky name’’, one which was devised over a couple of beers after a long day digging fossils in the field.
The Mojoceratops was apparently hiding in plain sight for years. Longrich was studying a dinosaur called a Chasmosaurus (pictured above) from museum fossil specimens when he realized that he was looking at a mishmash of two species. Mojoceratops lived 75 million years ago in what is Canada today and probably survived for only about 1 million years. The discovery was published this month in the Journal of Paleontology. Click here to find out more.
Labels: Dinosaurs Today's Science News Todays Science News