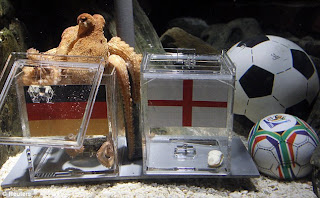 Well I must admit that I'm a little off the ball and somewhat slow to report these exciting stories. Summer holidays are disrupting regular blogging! But two of the major stories this week have been animal related - no frogs yet but what can you do? Firstly to Paul the Psychic Octopus, who lives in the Sea Life Aquarium in the German city of Oberhausen. Paul has successful predicted the outcome of all of Germany's World Cup games so far, including their 1-0 defeat to Spain earlier this week. Now he has predicted that Germany will win in Saturday's 3rd and 4th place play-off against Uruguay and Spain will defeat the Netherlands in Sunday's final. Click here to find out more and to see a video of Paul predicting that Spain would defeat Germany!

Also in the news today is the story of Kelli the Penguin, who was stolen from Dublin Zoo yesterday and left to wander in Dublin city centre for a few hours (presumably for some sight-seeing or an open top bus tour) before being handed into Store Street Garda station. No ransom was sought for Kelli, who was returned to the Zoo yesterday evening and reunited with her partner Mick (who I presume is also a penguin). Kelli is said to be recovering well from the incident. Kelli is a Humboldt Penguin and is originally from Chile! This story does remind me about our long forgotten Penguin Corner which I hope to resurrect soon! For more on the story, click here.

What's next? A tiger kidnapping?