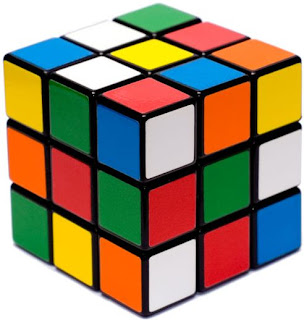 Today is the birthday of Erno Rubik, the Hungarian mathematician, educator and inventor of the Rubik's Cube (1974). The Rubik's Cube became a popular toy of the 1980's but has experiencing something of a revival recently! Rubik's Cube consists of 26 small cubes that rotate on a central axis; nine coloured cube faces, in three rows of three each, form each side of the cube. When the cube arrangement is randomized, the player must then return it to the original condition of faces with matching colours, which is one among 43 quintillion possible configurations! To find out more about Erno Rubik click here.
Labels: Mathematicians On This Day