From Silly Science to Super Science 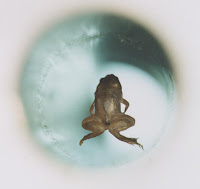 Congraulations to Andre Geim, who this year won the 103rd Nobel Prize for Physics with his work on graphene - the thinnest and probably hardest material in the world. But ten years ago, Mr Geim was the proud recipient of an illustrious Ig Nobel Award (see yesterday's post on this year's winners) for his work on levitating frogs - seriously! Yes the flying frogs experiment involved Geim and his team using a popular magnet toy to make a frog float and he succeeded. His research centered around serious ideas about magnetic levitation, a phenomenon best known for its application in Maglev (magnetic levitation) trains, like the Japanese bullet train. Mr Geim became the first person to be award both an Ig Nobel and a Nobel Prize as an individual. Well done!
Labels: Light Hearted Moment Today's Science News Todays Science News