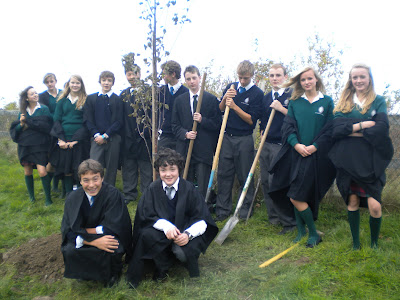 Last Thursday, the 7th October, was National Tree Day. Over the last number of years, Mr Swift (along with his Form III CSPE pupils) have planted a tree to mark the occasion and this year was no exception. This year’s tree was the birch and Mr Swift, along with Form III A, planted the tree in the College grounds as part of their CSPE action project. On National Tree Day itself, the whole school were treated to a talk from Nicolo Carlotti and Michael Higgins about the event, representing the pupils in the set, speaking about the birch tree’s origins. The aim of our action project is to raise awareness about the importance of trees and of the National Tree Council of Ireland.
The birch is a tough native Irish tree and can grow in harsh conditions. It has a rapid growth rate in its first twenty years.It matures at forty years and grows to a maximum height of eighty feet. The bark is a bit pinkish in young trees, turning into the whitish silver it is known for, and then the bark darkens with age.
Article and photograph by Josh Mathews and Juliana Huggard
Labels: General Notices