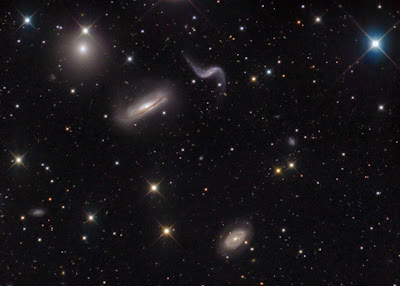 Back in April 2009 we reported that scientists had discovered the furthest object from Earth - a gamma ray burst 13 billion light years away, spotted by the NASA Swift 3 satellite. But now astronomers have trumped that finding, discovering a galaxy 13.1 billion light years away. The galaxy (brilliantly named UDFy-38135539) was pictured last year by Hubble's Wide Field Camera 3, and was most likely formed a mere 600 million years after the big bang. To measure the distance to the galaxy, the scientists took a spectrum of the object using a spectrograph mounted on the European Southern Observatory's Very Large Telescope in Chile. By analyzing the spectrum, the researchers determined that the galaxy was a distance of 13.1 billion light-years away from Earth. Simple!
Labels: Astronomy Today's Science News Todays Science News