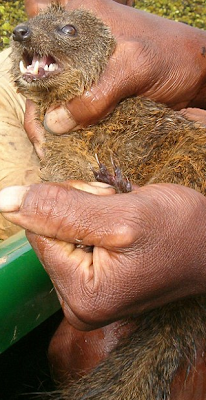 A new cat sized mammal has been discovered in Madagascar, the first new carnivorous mammal to be discovered in over 20 years. Scientists found the creature in the wetlands of Lake Alaotra, the largest lake in Madagascar. Its marsh habitat is under pressure from invasive species and pollution. The animal resembles a mongoose and has been called Durrell's vontsira (Salanoia durrelli) in honour of conservationist Gerald Durrell. It belongs to a family of carnivores called the Eupleridae, only known in Madagascar, and it is likely to be one of the most threatened carnivores in the world.
The animal was first spotted swimming in a lake by a team from the Durrell Wildlife Conservation Trust in 2004 while they were surveying bamboo lemurs. After briefly examining the animal the team suspected they had found a new species and took photographs of it. Subsequent analysis of specimens of another species, the brown-tailed vontsira, in the Natural History Museum's collections, showed that they had found a new species.
Madagascar and the Indian Ocean Islands are known as a biodiversity hotspot because of their great richness in species. They have 7 families of plants, and 15 families of mammals, birds, reptiles, amphibians and fish, which live nowhere else on Earth.
Labels: Mammalia Today's Science News Todays Science News