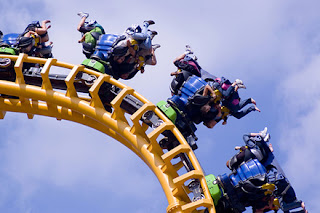 The Ig Nobel Awards are a humorous alternative to the Nobel Prizes,which are awarded to research that “first makes us laugh and then makes us think”. The awards are given to true scientists who carry out true research but the topic surrounding their research is light, cheerful and a bit silly. Amongst this year’s winners are (adapted from the Guardian):
Medicine prize
Psychologists Simon Rietveld and Ilja van Beest at the University of Amsterdam share the award for discovering that ashtma can be relieved by rollercoasters.
Physics prize
Awarded to Lianne Parkin and her team at the University of Otago in New Zealand for demonstrating that people are less likely to slip over on icy footpaths if they wear their socks outside their shoes instead of inside.
Biology prize
For discovering the unusual sexual antics of the short-nosed fruit bat earned the award for Gareth Jones at Bristol University
Peace prize
Presented to psychologist Richard Stephens and others at Keele University for confirming that swearing relieves pain.
Engineering prize
For collecting and studying whale snot by attaching petri dishes to the underside of small, remote-controlled helicopters and hovering them overhead their blow-holes.
Transportation prize
Working with Japanese scientists, Mark Fricker and Dan Bebber at Oxford University used slime mould to model an effective railway network.
Management prize
To Alessandro Pluchino and team at the University of Catania for demonstrating mathematically that companies work more efficiently if staff are promoted at random.
Public health prize
Awarded to Manuel Barbeito at the Industrial Health and Safety Office in Maryland for showing that men with beards carry more bugs.
Chemistry prize
For research in 2005 that overturned the long-held belief that oil and water do not mix, the prize was awarded to Eric Adams at MIT and others, including researchers at BP.
Economics prize
Awarded jointly to the executives and directors of Goldman Sachs, Lehman Brothers, Bear Stearns, Merrill Lynch, AIG and Magnetar for "creating and promoting new ways to invest money – ways that maximise financial gain and minimise financial risk for the world economy, or for a portion thereof."
Labels: Light Hearted Moment Today's Science News Todays Science News