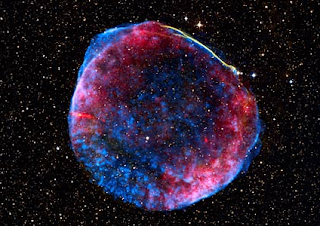 A Raheny man has discovered a supernova (an exploding star). Dave Grennan, an amateur photography, was about to give up star gazing for the evening when he spotted the 290 million year old explosion using his powerful telescope. Mr Grennan is said to be "over the moon" after the most significant Irish astronomical discovery ever. The supernova has been given the uninspiring name Supernova 2010 IK and is said to be a type 1b supernova. They happen when a huge star shifts material to a smaller nearby star. Eventually the larger star becomes so unstable it blows up in a catastrophic explosion. These events are extremely rare and Mr Grennan was extremely lucky to be the first witness to such a fantastic event.
Labels: Astronomy Today's Science News Todays Science News