Relax, it is OK to Leave the Kids in the Crèche! 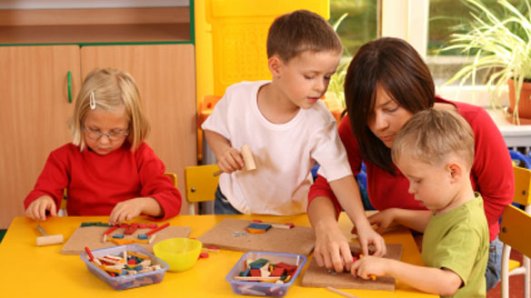 A recent issue of New Scientist picks up an interesting story about how our collective approach to looking after children may underpin human social awareness and cooperation.
Humans are peculiarly empathetic when compared with our closest relatives the chimps, and researchers claim that this may be due to psychological changes which are linked to the care of children by individuals other than their mother. These changes result in the “enhanced cooperation and altruism that ultimately led to culture, language and technology”.
As humans we work well together in teams and are generally good at reading other people’s emotions and supporting each other accordingly. We sometimes even extend our kindness to perfect strangers. Ernst Fehr at the University of Zurich ran an experiment in which people were given €20 and asked to share as much or as little of it as they liked with an anonymous partner whose identity would never be revealed and who would never know the giver's identity. It makes sense to keep the lot but, against logic, most people gave away between 25 and 50 per cent of the money.

In experiments based on food sharing, other primate species which have cooperative childcare, such as marmosets (pictured across), also seem to exhibit altruistic behaviour within their group – whilst chimpanzees, which are more independent breeders without shared childcare, seem to have quite a mean and selfish streak.
Researchers Van Schaik, Burkart and Hrdy, writing in the journal Evolutionary Anthropology (Vol 18, p. 175), suggest that in groups which share childcare, the young need to be better at reading another's behaviour, to charm the adults and to recognise when someone might harm them. "The infants who are a little bit better at doing this are going to be those most likely to survive," says Hrdy. "Over generations you get directional Darwinian selection favouring infants who are a little better at mind-reading and a bit more inclined to quest for engagement with others."
Of particular interest to those of us engaged in the pedagogic process, the researchers extend their idea to other human social behaviour such as teaching. The best-known teachers in the animal kingdom - meerkats, ants and birds called pied babblers - are all cooperative breeders too. "Many people think that for teaching, you have to be clever," says van Schaik, "but the simple rules meerkats use in teaching pups how to hunt scorpions, for example, shows that you don't have to understand what you're doing to be an efficient teacher." What you do need, he claims, is the motivation and skills that allow you to share information with others, which he believes come from cooperative breeding.
Labels: Biology Stuff Pause for Thought