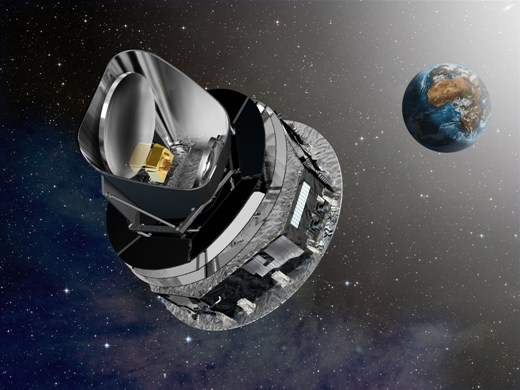 Planck is the European Space Agency's (ESA) deep space telescope studying the Cosmic Microwave Background (CMB), the relic radiation from the Big Bang, in an effort to understand more about how the Universe began and how it will evolve in the future.
Launched on May 14th 2009 on board an Ariane 5 rocket (along with ESA’s Herschel Infrared Observatory) Planck is currently 1.5 million kilometres from Earth, orbiting the second Lagrange point of the Earth-Sun system (on the night side of the Earth). If Planck were placed in orbit around Earth, heat from our planet, the Moon and the Sun would interfere with its instruments, reducing their sensitivity.
The spacecraft is equipped with a powerful telescope and two instruments operating at radio to sub-millimetre wavelengths. A sophisticated cryogenic system keeps their detectors at temperatures close to absolute zero. The primary job of the telescope is to focus the light onto the detectors. This is done with two large mirrors, one around 1.5m across and another 0.5m across. On board the two instruments, called the "Low Frequency Instrument" (LFI), and the "High Frequency Instrument", measure tiny fluctuations in the CMB with an accuracy set by fundamental astrophysical limits. The Mission Operations Centre (MOC) is located at ESA's European Space Operations Centre (ESOC) in Darmstadt, Germany.
Planck is named after the German physicist Max Planck (1858-1947) who won the Nobel Prize for Physics in 1918. Click here to see a 3D model of Planck. Recently, Planck's first results were published by the European Space Agency. Click here to find out more.
Labels: ESA Missions Space Exploration