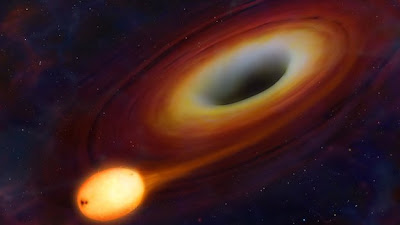 NASA's Swift telescope scans the skies for gamma ray bursts - enormous energy explosions associated with the implosion of ageing stars - in an effort to study these mysterious and cataclysmic events. Swift discovers around 100 gamma ray bursts every year and each lasts only a moment (releasing as much energy as our Sun would over its lifetime) but a recent discovery has given astronomers an insight into a very rare astronomical event - a star being devoured by a super massive black hole. Back in late March Swift discovered a unusual gamma ray burst from the centre of a small galaxy in the Draco constellation, located about 3.8 billion light-years from Earth. Within a four hour period Swift detected four gamma ray bursts from this one area. Working with Hubble Space Telescope, the Chandra X-ray Observatory and the Gemini and Keck Telescopes, they determined that the huge release of energy was down to the black hole feeding on a star (illustrated above). This event is extremely rare - astronomers expect only one in every galaxy every 100 million years or so. National Geographic News has more on this story - click here.