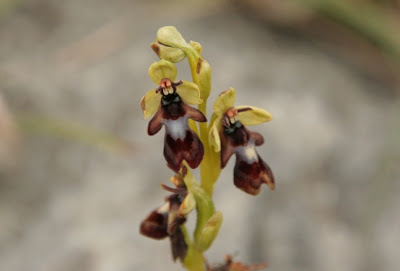 The second day of the Form V expedition to the Burren was jammed full of activities for our budding biologists. The day began on the foot of Slieve Carran - a nature reserve known for the enormous variety of plants found there. The pupils were introduced to using keys as a means of identifying plants, using Webb's "An Irish Flora", and set about using their new found knowledge to identify a number of plants including Dryas octopetala and Potentilla erecta. The pupils then carried out a qualitative assessment of the plants within the area, focusing on how the plant species changed as we moved further towards the mountain (from dry conditions to marshy to woodland). Finally, before leaving Slieve Carran, the pupils followed the "path of the dishes" to the hermitage of St. Colman Mac Duagh - a 6th century Christian recluse who lived in a cave on the side of Slieve Carran for six years before setting up a monastery on the southern border of Co. Galway. On the way back down the path, Mr. Jackson and Mr. Jones spotted a few Black Fly Orchids (Mr. Jones' picture above), an elusive and wonderful plant whose flower resembles a fly - hoping to attract a "mate" to collect and disperse its pollen.
After lunch, the pupils headed for Fanore Beach. There the pupils conducted another ecological survey, this time exploring succession from the sand dunes to the meadow, before going for a (cold) dip in the Atlantic! In the late afternoon, we moved a little further up the coast to carry out an extensive survey of a rocky seashore ecosystem. The pupils conducted both a qualitative and quantitative (belt transect) survey of the plant, alga and animal populations there. Back to the hotel for dinner followed by a wonderful talk by Mr. Jackson on the unique plant life in the Burren. Another busy day!
Labels: Science Field Trips