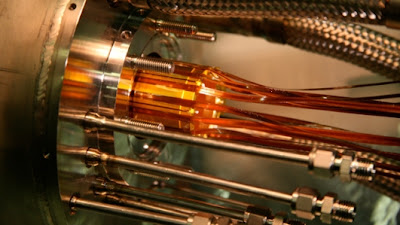 Scientists at CERN have successfully produced and trapped more than 309 atoms of anti-matter (anti-hydrogen to be precise) for over 16 minutes, long enough for the scientists to study them in huge detail. The international team of scientists work on the ALPHA experiment (Anti-hydrogen Laser PHysics Apparatus) at CERN, an experiment aiming to find out more about the mysterious and elusive particles of anti-matter.
Anti-matter is made up of "anti-particles" that have the same mass as corresponding particles of matter, but an opposite charge. For example, the antimatter counterpart of a negatively charged electron is a positively charged positron. Antimatter is very difficult to keep in existence because the moment it comes in contact with matter, which makes up most of our universe, both the matter and anti-matter are annihilated, producing pure energy. To trap the anti-matter, the scientists use a sophisticated magnetic trap to slow down and suspend the particles within a vacuum. The team this time managed to trap the anti-matter particles for over 16 minutes (1000 seconds) - significantly longer than previous attempts (the first time anti-matter was trapped it was released after one fifth of a second). The results of the experiment were reported in Nature - click here for more information.
Suggested student activity: Why not find out more about anti-matter and its potential uses. Here's a good place to start.
Labels: Physics Stuff Today's Science News Todays Science News