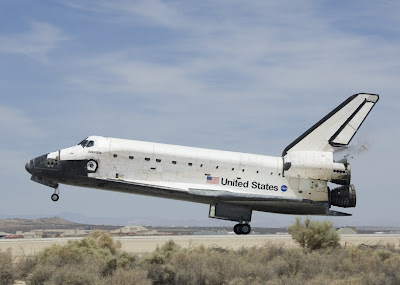 THE HUMAN adventure in space is about to lose much of its razzmatazz. July 8th sees the lift-off of the space shuttle Atlantis, the very last shuttle flight to be made.
Its departure on a 12-day trip to the International Space Station (ISS) brings to a close 30 years of space-shuttle travel and marks the beginning of an uncertain future for manned space flight.
The shuttle programme has brought us tremendous highs, watching as space-walking astronauts carried out essential running repairs to the wonderful Hubble Space Telescope, or as the shuttle’s robot arm manoeuvred another chunk of the space station into place.
It also brought us the deepest lows, with the loss of the shuttles Challenger and Columbia and the deaths of 14 flight crew. They died invisibly, far overhead, but the cameras rolled, allowing us watch as the reality of loss overwhelmed the horrified crews’ family members.
One could argue that the second great age of manned space travel comes to a close as Atlantis finally touches down. This was the age of the reusable space workhorse, a vehicle carried aloft by rocket but able to land like an airplane.
The space shuttle and the space stations it visited, including Mir and the ISS, sought to make travel into space routine. The shuttle was portrayed as the bus service that got you into orbit where satellites were dropped off or repaired and research in zero gravity was conducted before heading home.

The US National Aeronautics and Space Administration (Nasa), which developed plans for the shuttle even as the first manned Apollo flights took off in the 1960s, was perhaps a bit too effective at making manned flight routine, even boring.
Gone was the sense of excitement and adventure that gripped the world during the first great age in space travel that began in 1961, as Russian cosmonaut Yuri Gagarin became the first human to orbit the Earth.
The Americans quickly followed with the sub-orbital flight on May 5th, 1961 of Mercury Freedom-7 piloted by Alan Shepard, and then nine months later a three-orbit Mercury flight by John Glen.
As the US and Soviet Union space programmes developed, each new step into space represented high drama, with each returning pilot becoming another hero treated to a tickertape parade.
The early flights were short, with an orbit taking just 90 minutes. I remember as a child in primary school how a television would be set up at the front of the classroom so we could watch history unfold before our eyes. Needless to say, astronaut quickly joined train engineer and fireman as the most coveted jobs to aspire to by the boys in the class.
The drama continued on July 20th, 1969, when the Apollo 11 flight landed the first humans on the Moon. It was a moment of huge triumph during the dark days of the Cold War and the grinding tragedy of the Vietnam War.
Apollo 13 also caused a stir in 1970 when an explosion cut short its trip to the moon. After that, however, we quickly got used to successful flights and public interest waned.
During this time, however, planning for the shuttle was already under way. While the manned flights of the 1960s and 1970s were all about human adventure, the Skylab orbiting space station failed to capture the public imagination in the US.
This also meant, however, that there was little to compete with the space shuttles when they approached their first manned launch in 1981.
They were portrayed as a new kind of spacecraft and patently they were. They were the only winged manned spacecraft that could reach orbit but land like a plane on a runway. They were also the first reusable space vehicle, specifically designed to make multiple flights. They had an assumed life of 10 years and 100 flights on paper.
They were also the first manned spacecraft to have liquid fuel engines fed by a large detachable tank, but also twin solid-fuel boosters to help propel the heavy vehicle into orbit.
This new kind of human flight into low-Earth orbit again captured the public imagination, so the scene was set for a triumphant return to space.
Construction began on the first shuttle, Columbia, in 1975 and its lift-off on April 12th, 1981, initiated the age of the shuttle. Planners had assumed that with a full complement of five shuttles, Nasa could deliver four flights a month, very much providing a bus service into space.
Another 23 uneventful flights followed the first and public interest once again flagged as space travel became routine. This all changed however when flight STS-25 took off on January 28th, 1986.
Shuttle Challenger was only 73 seconds into its planned mission when a solid-fuel booster failure caused the huge liquid-fuel tank to detach. Explosive and aero-dynamic forces literally tore the shuttle apart, causing the deaths of all seven crew.
The accident showed that space travel was anything but routine and remained a highly dangerous endeavour. It took more than two years for the shuttle programme to recover, improve safety and get flying again.
Things once again fell into a comfortable pattern with flight after flight returning home safely. There were highs, for example flight STS-35 in April 1990, which saw the deployment of the Hubble Space Telescope.
Tragedy was to strike once again, however. Seven more astronauts were to die when flight STS-113 failed to come home, shuttle Columbia disintegrating during re-entry due to the failure of heat-shielding tiles. The loss of Columbia effectively delivered the death knell for the shuttle programme. Another two-and-a-half years passed before flights resumed and so they have continued until now.
Most of the last 20 have been essential delivery and servicing flights to the ISS. The heavy-lift capacity of the shuttle was essential to the building of the ISS and now the last large module, Raffaello, will be carried aloft on the final flight STS-135 on board Atlantis.
This article appears in today's edition of the Irish Times.
Labels: Space Exploration Today's Science News Todays Science News