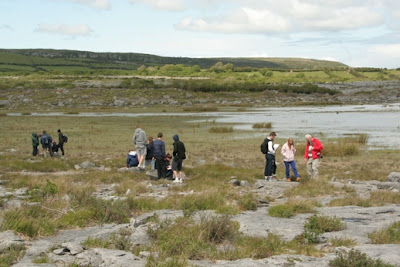 The third day of the Form V biology expedition to the Burren was another busy one, but had a more relaxed feel to it. The day began with a trip to the Cliffs of Moher to do some sightseeing and bird watching before heading to the Gortlecka Fen on the foot of Mullach Mór for lunch, frog watching and some more practical work. Here, the pupils were given a fictional scenario where they had to prepare a report on the plant and animal life in the area to support of an objection to a "proposed" interpretive centre for the fen. They also had to make out a key to allow people distinguish between the six types of yellow flower found in the area.
After the activity, which the pupils revelled in and really enjoyed, the pupils and teachers headed on a leisurely hill walk. The two hour trek saw the team (split into small groups) climb three mountains - Mullach Mór, Sliabh Rua and Knockanes. The weather stayed on our side too and the team were basked in glorious sunshine throughout. After the walk a few brave pupils went for a cold dip at Bishop's Quarter before heading back to the hotel. That evening the pupils competed in the Brains of the Burren quiz with team number 1 (Ecology not Economy) winning out.
The pupils head home on Saturday afternoon, but not before fitting in a bit more geology, biology and even a bit of history!
Labels: Science Field Trips