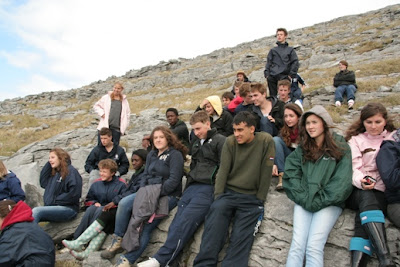 Day one of this year’s Form V biology expedition to the Burren kicked off yesterday as the 40 strong group of pupils and staff made the long journey west to one of the most beautiful and unique areas of the Irish countryside. The team, led by the four biology teachers (Jeremy Stone, Peter Jackson, Karen Hennessy & Humphrey Jones), made a few stops along the way - first for lunch in Loughrea followed by a brief stop off at the 'Devil's Punch Bowl' in Beagh just outside Gort, where the Gort River dissappears beneath the limestone - a classic example of a collapsed cave called a doline. The next stop was of a historical nature - at Kilnaboy Church - a 16th century building with a couple of unique architectural features. On the gable end of the church is a well preserved "Cross of Lorraine" while over the main door is a "Sheela na gig".

Onwards then to our hotel in Lisdoonvarna before heading into the Burren proper, along the coast to Black Head. There we disembarked and made our way up the hillside - the pupils being introduced to the geology and plants of the Burren as we climbed - towards Caher Dun Irghus (a fairly well preserved stone fort atop the hill). There we were treated to some sunshine and a spectacular view of Galway Bay and the Aran Islands.

After dinner, back at the hotel, the pupils were treated to a short introductory lecture of the geological history of the Burren by Dr. Stone before a little star gazing with Ms. Hennessy. A busy day, but only the beginning!
Labels: Science Field Trips