Is 'Playing the Field' Genetic? Apparently! 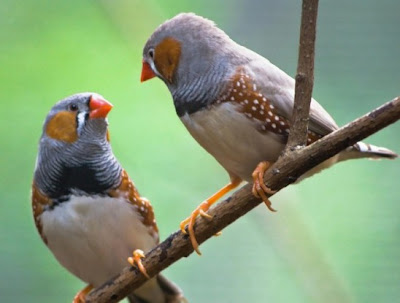 A scientist in Germany has discovered that promiscuity, or the willingness to 'play the field', may be inheritable. Dr Wolfgang Forstmeier, and his team, from the Max Planck Institute for Ornithology studied a captive population of more than 1500 Zebra Finches over five generations. During their research, the team recorded the birds' sex lives on videotape (weird I know) and then carried out paternity tests on the offspring, determined which males and females had the most offspring. The results were very interesting!
Female Zebra Finches are normally monogamous, staying with the same male for life. Yet, some females in this study were observed to "sleep around" and mate with others occasionally. But why? Well, Dr. Forstmeier's results indicate that female finches that slept around are more likely to come from fathers who were themselves more promiscuous.
So could a willingness to sleep around be inheritable in humans? Well, this research proves that promiscuity  in finches is inheritable and more research will need to be done to find out which genes are actually responsible for this behaviour. However, the principle of animal sexual behaviour is the same for humans as it is birds and a similar phenomenon is likely to occur in humans! It's no excuse though!
For more information on this story click here.
Labels: Today's Science News Todays Science News