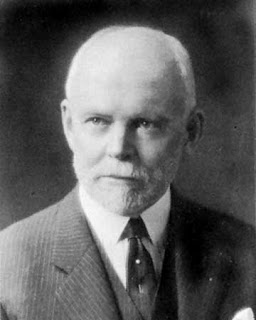 American embryologist and cell biologist Edmund Beecher Wilson was born this day in 1856, in Geneva, Illinois. Wilson was prolific in his research output and, amongst other things, published on movement in Hydra, embryology of the earthworm and development in the marine worm Nereis and in amphioxus. In 1898 Wilson published a study which highlighted similarities in the development of embryos in different animal phyla, and thus concluded that molluscs, platyhelminthes and annelids must have a common ancestor. In 1905 Wilson published his work on sex determination by XX and XY chromosome pairings (also discussed by Nettie Stevens in a separate paper in the same year).
Wilson came from a long established New England family, and was reputedly descended from one of the officers of the Mayflower – which reached Cape Cod in Massachusetts from England in 1620. Wilson’s mother left New England with her family due to financial pressures arising from the economic crisis of 1837.
As a child Wilson’s great loves were natural history and music, and after a short spell as a schoolmaster he went to Antioch College in Ohio, where he was determined to devote his life “to biology or at least to science”. He found the teaching in Antioch to be good, but in 1875 moved to Yale – where he got a degree in Biology. Wilson moved to Johns Hopkins university in Baltimore, Maryland for three years, and then went to study in Cambridge University in England, Leipzig in Germany and Naples in Italy. On his return to the US Wilson spent time at MIT before moving to the newly established Bryn Mawr university in Pennsylvania, where he took charge of the Biology Department.
In 1891 Wilson spent another year in Europe (in Munich and Naples) before moving to Colombia university in New York. In Munich Wilson had met and been greatly influenced by the German embryologist Boveri (from Bamberg): “The best that he gave me was at the Cafe Heck where we used to dine together, drinking wonderful Bavarian beer, playing billiards, and talking endlessly about all manner of things”.
JJS
Labels: On This Day People in Science