Skip to main content
Labels
Posted by Unknown October 17, 2008
A Short Description of the Life of Carl von Linne or 'Linnaeus'.
Carl von Linne was born in Smaland in South Sweden. He later took the latinised name Linnaeus. He was educated in 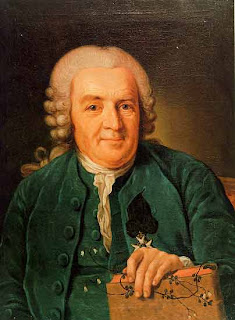 Uppsala University, and began lecturing there in 1730 on the topic of botany. He published the first edition of his Systema Naturae in the Netherlands. He then returned to Sweden where he became professor of botany at Uppsala University. In the 1740s he was sent to classify animals, plants and minerals. This is known as taxonomy. He published several books. Also at the time of his return to Sweden, he settled in as a physician. He was the founder of the Royal Swedish Academy of Sciences. When not travelling Linnaeus worked on his classifications, extending them to the kingdom of animals and the kingdom of plants. He was the founder of the idea that animals should have an every day name and a scientific one too. He truly was the Father of Classification.
Jake Jacobsen (4th Form)
Labels: People in Science Pupil Work