Asian earthquakes tend to arise because of plate tectonics, as Africa, Arabia and India all push northwards into Eurasia.
The frequency of earthquakes which cause death tolls of more than 10,000 has risen to 1 every 2 to 3 years (compared with 1 per 5 years from 1600 to 1900). This does not mean that earthquakes are getting more common however, but reflects a rapidly growing population being crammed into relatively poorly built accommodation – such that each earthquake now has much greater potential to cause multiple deaths. This situation is coupled with a tendency for settlement to be attracted to earthquake zones due to faults causing transport corridors through mountainous regions, and because fault zones can create aquifers and springs in otherwise arid areas.
Improved building regulations in places such as Japan and California have shown that death tolls in earthquake zones can be greatly reduced through good planning and high standards of construction. Jackson concludes that if the number of earthquake deaths is not to rise greatly over the next few decades, there needs to be a marriage between geological awareness and political will and resolve in planning construction activity in the rapidly enlarging population centres which fringe the Alpine-Himalayan mountain belt. (JJS) 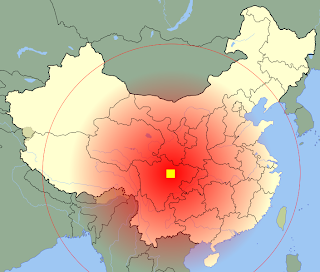 The May 2008 Chinese earthquake in Sichuan killed 70,000 people
Labels: Geology Pause for Thought