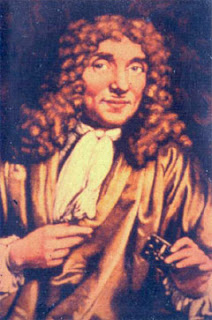 Dutch draper, biologist and microscopist Antonij (or Antonie) van Leeuwenhoek was born this day in 1632, in Delft in the Netherlands. van Leeuwenhoek made his own microscopes (see below) and was the first to discover and describe bacteria, protoctista and sperm. He was also the first to suggest that fertilisation occurred by sperm entering an egg cell. He was a remarkable man who became a fellow of the Royal Society of London and one of the leading scientists of his day – despite having no formal training.
van Leeuwenhoek’s father was a basket maker and his mother’s family were brewers. He went to school some 25 km north of Delft in the town of Warmond near Leiden, and was then apprenticed to a Scottish textile merchant in Amsterdam at the age of 16. It was here that he saw his first microscope – which was being used to examine the quality of fabrics. At the age of 22 van Leeuwenhoek returned to Delft and set himself up as a linen draper. Some ten years or so later it seems that he came across the work of English microscopist Robert Hooke, and this inspired him to use his microscopes to investigate the natural world. van Leeuwenhoek never wrote a formal scientific paper, but described what he found in letters to the Royal Society or to his friends. Despite his casual and conversational style of reporting, his observations were extremely accurate and he was careful not to confuse the facts with speculation. When he was 41 his observations of bee mouthparts and a human louse were published by the Royal Society, and three years later he became the first person to see bacteria. He was elected a fellow of the Royal Society in 1680.

Leeuwenhoek’s microscopes consisted of a single lens mounted on a brass plate, and he is believed to have made over 500 in his lifetime. Such instruments are not easy to use, and he must have coupled great technical skill with infinite patience in making his observations. His curiosity seemingly knew no bounds and he discovered parasitic protoctista (‘animalcules’) and spirochaete bacteria in a sample of his own faeces, and five different kinds of bacteria in his mouth. He died at the age of 90, on August 30th, 1723 in Delft.
JJS
Labels: On This Day People in Science