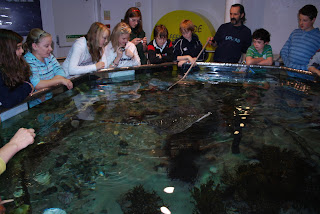 1. The Touch Tank
On the 10th October 2008 we visited the aquarium in Portaferry, Co. Down. We learnt that there are two main groups of fish: bony fish (e.g. cod, haddock, turbot), and cartilaginous fish (sharks and rays). In the touch tank we saw: dog fish, bull huss, lesser spotted shark and thornback rays, which are all cartilaginous.
Sharks have existed for over 450 million years, and 65% of all known sharks are considered at risk. Sharks can come in many different sizes. Angel sharks grow up to 2 m long and eat: fish, crustaceans and molluscs. Angel sharks hide in the sand so no-one can see them. Angel sharks are most likely to be found in the Pacific Ocean because they only like warm water. Angel sharks have sharp teeth. The thornback ray (pictured above) is the most common ray. It has a long thorny tail and it can grow to be over 1 m long, and weigh up to 4 kg. Rays eat shrimps, amphipods, crabs and small fish. 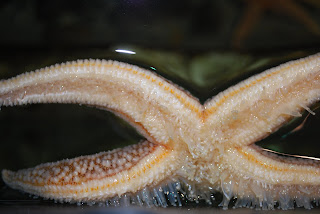 2. The Seal Sanctuary
Seals are often found around the coastline of Ireland. In Portaferry they bring in seal pups which are sick or abandoned. When they arrive in the seal sanctuary they are separated from the seals that are well and get put in sections with a light above their head. To get the seals to eat when they are young, the feeders stick a fish down the seal’s throat until they learn how to do it themselves. When they are older they get moved to a different area, and the seals that we saw were called Aero, Bounty, Crunchie, Munchie and Smarties. The grey seals have a long horse head face.
Labels: Pupil Work Science Trip Reports