Ever Since Darwin by Stephen Jay Gould 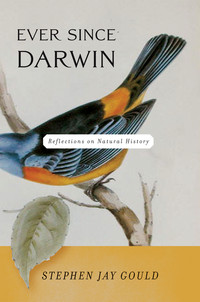 American palaeontologist Stephen Jay Gould died of cancer in 2002, at the age of 60. Starting off in Antioch College and Colombia University (as did Edmund Wilson, see below), he spent much of his life at Harvard University, and was both a renowned researcher and a skilled writer and populariser of science.

His first collection of Natural History essays, Ever Since Darwin was published in 1977 and when I read it, at the age of 16 or 17, it had a profound effect. From then on I wanted to study palaeontology and evolution, and I learnt to value erudition coupled with clarity of expression in scientific writing.

The book consists of 33 unconnected essays, each just 6 or 7 pages long, and all on the theme of evolution and Darwin’s work. These were originally written between 1974 and 1977 for Gould’s regular column in Natural History magazine. Gould’s style is chatty and well informed, and he structures his essays in exemplary fashion. His general knowledge is wide ranging and he weaves music, literature, sport and history into his essays seamlessly, without ever losing sight of the central scientific thrust of each piece. His sixth essay, to take a fairly random example, is titled ‘Bushes and Ladders in Human Evolution’, and its start is typical of Gould’s style.


‘My first teacher of paleontology was almost as old as some of the animals he discussed. He lectured from notes on yellow foolscap that he must have assembled during his own days in graduate school. The words changed not at all from year to year, but the paper got older and older. I sat in the first row, bathed in yellow dust, as the paper crackled and crumbled every time he turned a page.’

Gould spent time working in Dublin, and amongst other things this led to his ninth essay ‘The Misnamed, Mistreated and Misunderstood Irish Elk’. If anybody were to read just one of the essays – to get a flavour of the book, then this would not be a bad place to start. The book starts with a look at Darwin the man and then, amongst other things, romps through human evolution, odd organisms, the zoology of size and shape and racism.

All in all Gould is a bit of a hero to me, and was a remarkable man who famously became involved in testifying against the compulsory teaching of creationism, and had a long running and at times acrimonious debate with (the slightly irritating) Richard Dawkins. Gould wrote a string of collections of short essays on natural history, and a marvellous book on the unusual extinct animals of the Burgess Shale in British Columbia (Wonderful Life). His last major publication The Structure of Evolutionary Theory, will shortly be hitting the Library’s shelves, and I look forward to reading it with great anticipation. Go on, give Ever Since Darwin a try!

For more information on the man himself, see http://www.stephenjaygould.org/original.html
Labels: People in Science Science Books in the Library