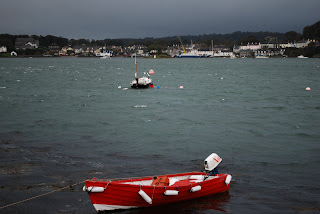 On Thursday 9th October 2008, the entire First Form headed off to Northern Ireland for a three day science trip. The American cross-gender school soccer classic She’s the Man, provided the on-board entertainment as we headed through the rain towards Armagh Planetarium – our first port of call. There we saw a film presentation on being an astronaut, built and then flew our own rockets (made from old Coke bottles and sticky tape), and viewed exhibitions covering all aspects of space exploration and planetary science.
After a hurried packed lunch it was time to head for a rainy Castle Espie, on the shores of Strangford Lough, where an introductory talk emphasised the global importance of our wetlands, and we were introduced to the different types of wildfowl (ducks, geese and swans). We stood in the rain and fed various diving-ducks with their distinctive rear-ended legs (e.g. the red breasted merganser and tufted duck), and dabbling-ducks such as mallards, pintails and wigeon. Then, out on the mudflats, there was a chance to view brent geese - just arrived from Greenland and Canada via Iceland. At Castle Espie we also saw the early stages of a building project involving recycled materials and energy-efficient design.
Finally it was time to cross on the ferry from Strangford to Portaferry, where the good ladies of Barholm Hostel had our supper ready and waiting. After supper a 45 minute review session finished off a long but varied day. 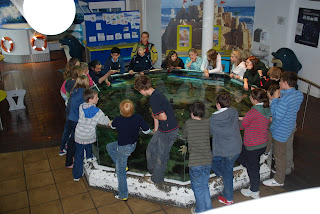 Day two dawned grey and rainy, and after a pleasant cooked breakfast we strolled along the lough shore to the new tidal energy plant, and had a brief introduction to the geology of the area. We then walked around the corner to the Exploris aquarium, where we were introduced to various marine animals in the ‘touch-tanks’ - followed by a guided tour around the excellent aquarium and seal sanctuary.
After lunch it was off to the Ulster Transport Museum for a ride in a flight simulator, and a tour of the various exhibits, which allowed a questionnaire to be filled-in. The rain still fell as we had supper and once again we rounded off the day with a reflection and review session – focussing on how to plan the project work based on the trip.
On Saturday morning, somewhat confused by the lack of rain, we bade farewell to Barholm and drove into Belfast to the vast hands-on science experience that is ‘W5’. There we also visited a dinosaur exhibition with animated life-size models complete with steaming piles of dung! After a final Lagan-side packed lunch it was time to head wearily south once more and return to Dublin. All in all it was a great trip, and we’ll post some of the completed project work shortly.
JJS and KH
Labels: Science Trip Reports