The Burmese Python by Lorcan Maule

Members of Form IV are currently studying reptiles, specifically snakes. They recently had to write a piece on a snake of their choice. Here is an essay by Lorcan Maule on the Burmese Python. 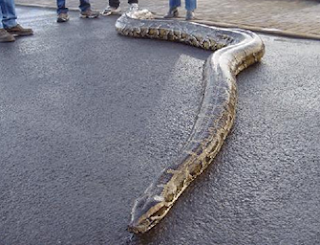 The Burmese Python is the 6th largest snake in the world, it is native to tropical areas of southern and south east Asia. They are found near water and they are semi aquatic, but can also be found in trees. They are normally 3.7 meters long, but some have been found to be up to 5.8 meters long. They are light coloured snakes with many brown blotches boarded in black down the back of the snake. The python is an excellent swimmer and needs a permanent source of water but it is normally found in grasslands, swamps, woodlands, jungles, and river valleys. They are excellent climbers and their tail helps them climb as it is prehensile.
Like all snakes, Burmese Pythons are carnivorous. Their diet consists primarily of appropriately-sized birds and mammals. The snake uses its sharp teeth to seize its prey, then wraps its body around the prey, killing the prey by constriction. They are often found near human habitation due to the presence of rats, mice and other vermin as a food source. Large pythons are know to eat pigs and goats.
Breeding of Burmese Pythons in the Americas has led to some serious problems. People have been known to release their pets into the wild rather than have them re-homed. This has been a problem in Florida, along with possible zoo and household escapees from Hurricane Andrew, where a large number of pythons have made their way to the Everglades. Over 1330 have been captured in the Everglades where they are competing with alligators as the dominant predator. Since they have been known to eat endangered birds and alligators, these snakes present a new danger to an already fragile ecosystem.
They are also excellent swimmers, being able to stay underneath for up to half an hour. Burmese Pythons spend the majority of their time hidden in the underbrush. Burmese Pythons breed in the early spring, with females laying clutches which average 12–36 eggs in March or April. She will remain with the eggs until they hatch, wrapping around them and twitching her muscles in such a way as to raise the ambient temperature around the eggs by several degrees. Once the hatchlings use their egg tooth to cut their way out of their eggs, there is no further maternal care. The newly hatched will often remain inside their egg until they are ready to complete their first shedding of skin.
Labels: Junior Frog Blog Reporters Nature Notes Pupil Work Reptiles

Mike Lynch said…
Just a note on your comment about Burmese Pythons being in the Everglades as a result of careless pet owners. If these were unwanted pets we would be seeing many of the color morphs seen in the pet trade, but we are not. All of the pythons being pulled out of the Everglades are what are generally called “Normal” – meaning they are of the coloring that is common to those that would be found in the wild… or those that are not selectively bred to create specific color morphs. There have been some specimens found in outlying areas close to suburban areas that have been of various color morphs but these have been few in number and are likely to be escaped pets, and not necessarily discarded or released. It is also state law in Florida that all pythons are to be micorchipped as part of the permit process. No microchipped pythons have been found. This is not to say that every python owner is living up to their end of the law, and there are pet owners who, despite the law, will have not had there pets microchipped or have a permit for them, but given the number of currently microchipped Burmese Pythons in the state of Florida it is not likely that many of the current population are released pets.

And given the wide range of territory that is populated by these snakes it would have made it very difficult for pythons released in to the wild from varying locations around southern Florida to come together and create a breeding population. Chances are they would never cross paths, or even reach each other, and breeding would not occur. In order for a breeding population to occur a number of sexually mature members of the species would need to be within the same relative location of each other – otherwise you limit the chances of them ever meeting. …Especially given the size and scope of the Everglades National Park.

There is also the fact that areas found to have Burmese Python populations are among the highest patrolled in the state, and given that it is illegal to release an unwanted pet into the wild in Florida it would make it a challenging prospect to let a pet go in these areas. Add to this that no one has ever been caught releasing a Burmese Python into the wild and this further limits the possibility that this is the case of the current feral population.

As you mentioned it is believed that many of these Burmese Pythons in southern Florida are present as a result of Hurricane Andrew. It’s also believed that Hurricane Katrina may have played a part in this as well, but that has not been confirmed one way or another. …And it may never be confirmed.

Touching back on Hurricane Andrew – it is known that a reptile wholesaler had a large plastic green house as a caging facility for over 1,000 juvenile Burmese Pythons. As Andrew swept over southern Florida the greenhouse was destroyed and many of the surviving pythons escaped into the surrounding ecosystem. This was not something that could have been foreseen, and is an unfortunate accident, but it is likely here that we see the cause of the current population expansion of non-native constrictors in the Everglades.

I also would like to touch on your view of the Burmese Python being a competing apex predator. These snakes are not without their share of predation in the Everglades. Feral Burmese Pythons are being preyed upon throughout their development. As juveniles they are preyed upon by feral cats, as well as native big cats, various birds of prey and as these snakes grow they become the prey of the American Alligator. Yes, each of these animals can, in turn become prey for the pythons as they grow, but these snakes are not without their own predators. As a result they are not currently believed to the usurping any niche.

Unknown said…
It is not easy to find someone to take a large snake like Burmese Python if you can no longer care for it. Never, ever release your pet as, released Burmese pythons have invaded and are breeding in the Florida Everglades and have become a serious threat there. Owners have died due to handling mistakes with these snakes as well, they are not suitable for beginners and are generally best left in the wild.
1:27 pm

aadi said…
Burmese python, that measured more than 17-feet, was captured and destroyed in Okeechobee County. The male snake weighed 207 pounds and measured 26 inches in diameter. The giant snake was caught on the property of the Okeechobee Veterinary Hospital and destroyed, the Florida Fish and Wildlife Conservation.
http://www.wildlifeworld360.com/beautiful-burmese-python.html
5:16 am